The Atlantic bluefin tuna is a large, highly migratory species distributed throughout the north Atlantic basin. Countries throughout Europe, the Mediterranean, North Africa, and the West Atlantic pursue this fish for commercial and recreational purposes. Bluefin travel throughout the north Atlantic, and such mobility can make them more difficult to study than more sedentary animals, making their life history more complicated to fully understand.

Although studied for decades, long-term programs that collect important biological data to improve information on life history have been largely unsuccessful. Key aspects of life history, for example, age structure, growth, spawning, longevity, and migration still require considerable scientific exploration in order to better manage their population. These efforts are needed on an annual basis, to account for the changes brought about by the environment, fishing pressure, and their respective interactions.

Originally managed as a single Atlantic wide stock, Atlantic bluefin tuna management changed beginning in the 1970s when stocks were split between tuna populations east and west of management division (45°W meridian) under the assumption that the two stocks had separate spawning grounds and did not mix. If these stocks do mix, it’s important to know the mixing rate so we can make sure landings from the west stock came from the west Atlantic population. If unable to account for this mixing, stock statuses face the risk of artificial inflation or deflation. 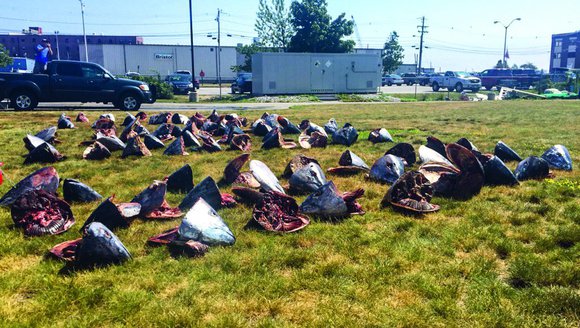 Determining Where Bluefin Tuna Come From | On The Water

Our project sets up long-term biological sample collections to fill in life history gaps, including age structure and stock mixing. We do this by using different tissues that can show us how long the fish lived, how fast it grew, and where it traveled. By working with commercial and recreational fishermen, and commercial dealers, we have established a large sampling network stretching from Maine to North Carolina.

Muscle samples and sagittal otoliths we collect can tell us about a fish's energetic status, stock composition, population abundance, and age structure. Information that greatly supports foraging ecology research. We extract sagittal otoliths from the head of each fish, and use information from those tissues to estimate the age of the fish and its natal origin. Like a tree, otoliths grow at different rates and accrete material faster and slower during winter and summer periods. By cutting these otoliths in half and looking at them under a microscope, you can count the rings and add them up to estimate the age of a fish. At the center of each otolith is the birthmark, material fish generate when on their spawning grounds. Isolating, analyzing, and comparing this birthmark material to chemical signatures in known spawning grounds allows us to determine where these fish originated.